This page details the results of research conducted as part of UCL STEaPP’s Masters of Public Administration programme, by July Galindo, Jessica Lis, Sarah Turner and Simon Turner. It was carried out in conjunction with the Open Rights Group and PETRAS Internet of Things Research Hub.

Google recently announced that they are intending to acquire Fitbit. Despite careful messages from both parties about the fact that personal data “will not be used for Google ads,” there was an almost audible groan from Fitbit users across social media, as they collectively realised that some of their most personal data would be moving within the Google family – regardless of their views on the matter.

But, what can these users do? Surely there must be a way to control where, and on which devices, your data is used?

In theory – if you are in the European Union, at least – the answer is “yes!”.

The right to Data Portability (RtDP) under Article 20 of the GDPR, is one of the lesser-known rights given to the data subject in the GDPR. RtDP gives a user the right to transfer personal data from one data controller to another. When used alongside other rights – particularly the right of erasure (Article 17 GDPR) – this right should enable users to be able to extricate their data from services that they no longer want to use, and move that data to a new service. 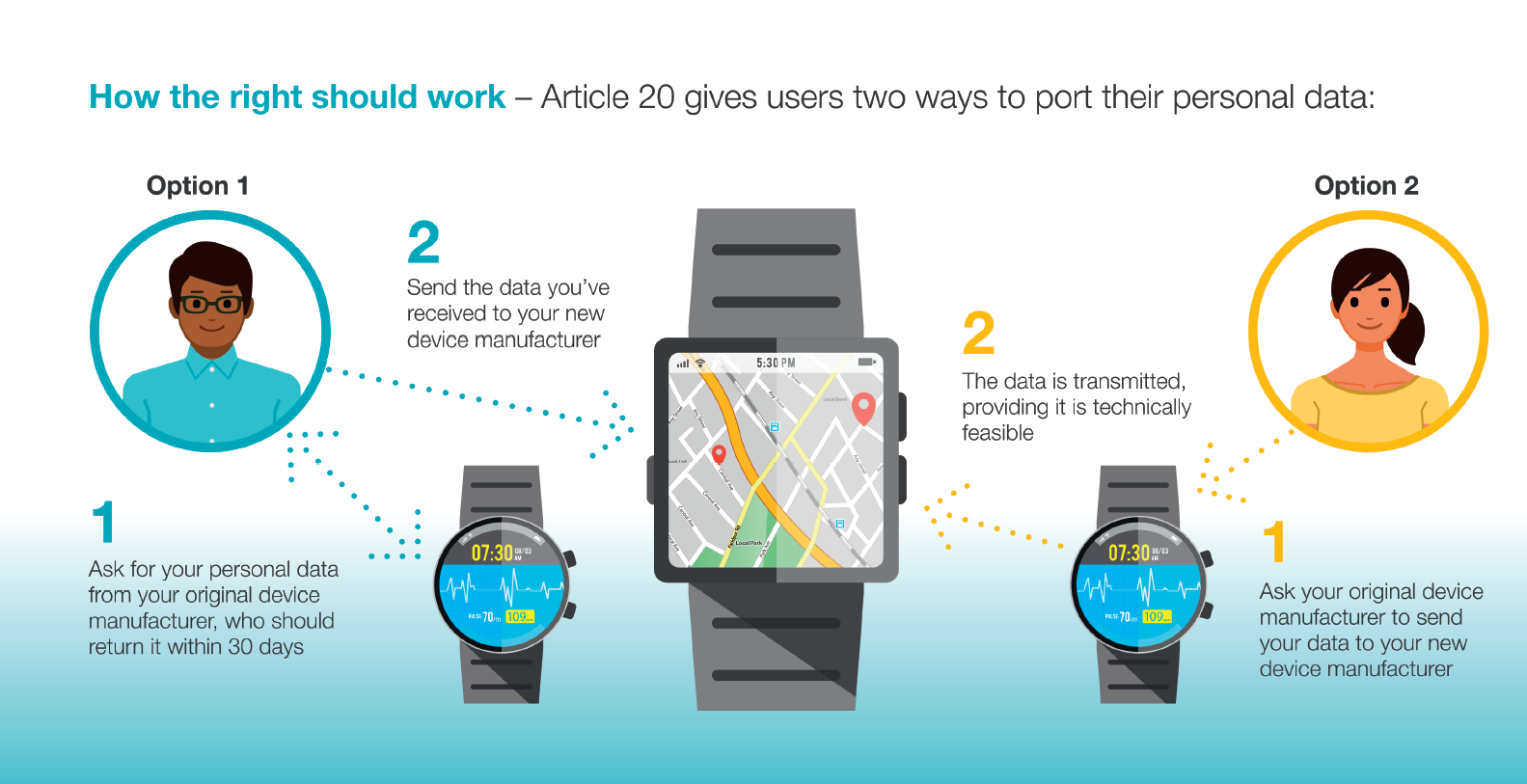 There are two ways in which the GDPR envisages data portability to work. In the first, the data controller must, without hindrance, provide the user with their personal data in a structured and readable format in order to transmit that data to another controller. In the second – where it is technically feasible – one data controller must send data directly to a second data controller when the user asks.

Data portability is a new concept, with less empirical research than other, more established, rights of the GDPR – such as the right of access (Article 15 GDPR). In particular, research in the context of the Internet of Things (IoT) has so far not been conducted. Data portability may be particularly important in the IoT, as personal data is key to making a device smart. Users may be unwilling – or unable – to change from unsuitable or unsupported devices because of the amount of data that they have provided to it.

We researched the status quo of the RtDP in relation to consumer IoT products available in the UK.

Our research had three strands:

A detailed overview of our device experiment can be read here.

The privacy policies of IoT vendors that we reviewed showed very little detail as to how to exercise RtDP is provided. Only 39% of the privacy policies we reviewed mentioned data portability, and even further to that, not a single privacy policy made any mention of importing personal data into their service. There was no explanation of the way in which the data controller would ingest data provided as part of an exercise of RtDP.

The interviews showed, on the whole, that individuals did not realise that this right existed, but once aware, would be keen to use it, should they find an opportunity – although many were not sure that the data that IoT devices collected about them was sufficiently valuable to warrant the effort. Experts lauded the intention, but highlighted the significant technical issues that would make direct ingestion of data hard in particular without further standardisation or concerted industry efforts.

It is difficult to see how Article 20 can be successful without users pushing for the ability to move their data between controllers. If individuals believe this right to be valuable, they will have to start asking for it!

We have set up the Twitter account @portmydata as a means of promoting the right, and amplifying users’ experiences of the portability experience.